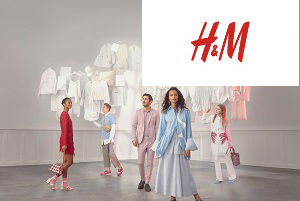 New invention of discount by H&M

There was a raincoat from Didriksons in various colours for 299 kroner (25 pounds/33 US dollars) instead of regularly 999 kroner (85 pounds/112 US dollars), or The Cords corduroy pants (corduroy is back!) in charcoal grey, moss green, ash grey, wine red or coffee brown for 199 kroner (17 pounds/22 US dollars) instead of 1299 kroner (110 pounds/145 US dollars). With discounts like these of 70 and 85 percent, respectively, it is worth it to keep an eye on the dayâ€™s â€œDream Dealsâ€, which are also available for home and furnishing articles.

Those visiting afound.com are first asked (in Swedish) to select one of the categories on offer women, men and home. Women and menswear is then additionally divided into sportswear and vintage, new articles, ladies bags, clothes, shoes,and accessories.

One can also search for one of Afoundâ€™s offered brands from & Other Stories and Alexander McQueen to Weekday and Yeezy.

Apart from Afoundâ€™s first brick-and-mortar stores in Stockholm (Drottninggatan 53) and Malmo (SÃ¶dergatan 28), which opened on 14th and 16th June, respectively, the discount concept plans to open three additional stores in Gothenburg, SkÃ¤rholmen and Kristianstad later this year and soon some outside of Sweden too. Afound is H&Mâ€™s tenth brand after Cos, Cheap Monday, Weekday, Monki, & Other Stories, H&M Home, Arket, /Nyden and namesake brand H&M.

H&M explains its new concept on the Afound website, â€œAfound is a marketplace a style and deal hunting paradise selling discounted fashion and lifestyle products, with both external and the H&M groupâ€™s own brands, offering a wide range of well-known, popular brands for both women and men. Today, Afound is only available in Sweden with a digital marketplace and physical stores. But, weâ€™re hoping to see more of the world soon.â€

Afound adds that, â€œWe pick up key items you cannot live without, brand clothes you've been looking for long after and timeless classics you're still dreaming about. Then we lower the price and present our findings for you. Some would call us an outlet, others would say we are heroes of our time.â€

However, the online shop is available in Sweden only to start with. Possible customers should thus be relaxed and at ease with navigating the site in Swedish and with prices in Swedish kroner.