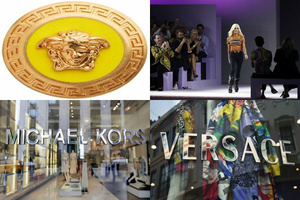 Name change to Capri follows the completion of the Versace takeover for $2.12bn

Michael Kors Holdings, like its counterparts in France, has charged aggressively into the upper echelons of luxury fashion hoping to pump up sales. Kering snapped up Gucci, Bottega Veneta and Pomelato and LVMH bought Bulgari and Loro Piana. Michael Kors is changing its name to Capri.

Beginning on 2 January, the companyâ€™s New York Stock Exchange ticker symbol will be CPRI. The company said the new name will reflect the â€œstrong foundationâ€ of its three brands, Michael Kors, Jimmy Choo and Versace. The name change follows the completion of the Versace takeover for â‚¬1.83billion ($2.12bn) this week, and will start a new chapter for the group with the aim of growing revenues to $8bn in the long term. Michael Kors Holdings Limited has changed its corporate name to Capri Holdings to reflect its new status as a multi-brand fashion group following the completion of its acquisition of Versace.

In addition to targeting $8bn revenues in the long term, Capri Holdings said the Versace acquisition will help it diversify its geographic revenues and increase its exposure to Asian markets.

John Idol, chairman and CEO expressed, â€œWith the acquisition of Versace, we have now created one of the leading global fashion luxury groups in the world.â€ Also, â€œThe new name for our group, Capri Holdings, is inspired by the fabled island which has long been recognized as an iconic, glamorous and luxury destination. The islandâ€™s spectacular three rock formation, formed over 200 million years ago, is symbolic of the timeless heritage and strong foundation that is at the core of each of the three founder-led brands.â€

Idol said that, â€œVersace has long been recognized as one of the worldâ€™s leading fashion luxury houses, and is synonymous with Italian glamour and style. We are thrilled that the house of Versace is now part of the Capri Holdings family of luxury brands. We look forward to working with chief creative officer Donatella Versace, chief executive officer Jonathan Akeroyd, and their incredibly talented team to continue to drive Versaceâ€™s growth and success globally.â€