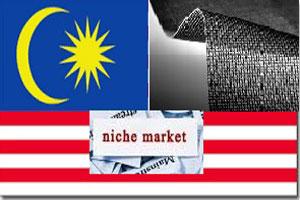 Malaysian to create a niche market in technical textile

Malaysia's strategy is to attract more companies in the technical and functional textiles or high performance textiles (such as flame-resistant, anti-bacteria, wrinkle-free, oil and water repellent, abrasion/tear resistant textiles) sub-sectors where high demand will come from high-end applications in the defence, aerospace, automotive, medical, construction and other industries, according to Malaysian Investment Development Authority (MIDA) director based Frankfurt, S. Sivasuriyamoorthy.

As Malaysia's texile and apparel industry may face strong competition from low-cost suppliers in Asia and elsewhere, the country's technical textile industry can start tapping the export opportunities inherent in developed countries.

In fact, Malaysia can build up a niche market in technical textiles in much the same way as the other high-cost suppliers such as Taiwan, South Korea, Japan, Hong Kong and Turkey have been doing.

Malaysia indeed made good strides in the industry, particularly in the use of high technology. One such company that left a mark at the Techtextil 2015 show was Apparel Alliance Sdn Bhd of Kluang, Johor, which provides information technology and automation solutions for apparel manufacturers.

The "red-hot technology", as Apparel Alliance director, Jordan Tang, put it, is the 3D (three-dimensional) digitalisation which has become the company's strong selling point. Their focus is on customizing products and services to the specific needs of their customers who are spread across the globe.

Tang received many visitors from Eastern Europe, the Baltic region, Sri Lanka and South America at the Techtextil show.

The 3D digitalization is evolving itself to make apparel and textile manufacturing more efficient. Efficiency enables faster deliveries means saving a lot of time on material handling. However, digitalization is not complete and there are still pieces left to fit in. In short, there is still room for research and development (R&D) efforts, Tang said, adding that digitalization would not do away with the labour intensive aspect of apparel manufacturing.

Thus, stitching and sewing will still be needed. Material handling accounts for a large part -- almost 60 percent of apparel manufacturing.

According to Tang, the "next big wave" will be digital printing.

Michael Jaenecke, a senior executive at Messe Frankfurt organizer of the Techtextil show, said that while the 3D digitalization had been in place for some time, it was "heartening" to know of the progress made by Asian countries, including Malaysia, in this regard.

Germany and Europe have an excellent textile machinery development base, according to Jaenecke.

Various industry groups are of the view that technical textiles will be a bright spot in the global textile business.Keeping this volume in mind, Malaysia has a lot of catching up to do and get a larger slice of the global pie.

The mantra to achieving this is innovation coupled with savvy marketing, as one German expert on Southeast Asia's textile industry recommended for Malaysia's future success.