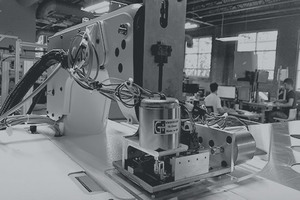 Machines could fuel comeback of textile industry in South

Machines are transforming the way textiles are produced â€” and they could fuel a comeback for the Southern textile industry. Automation and artificial intelligence are revolutionizing the workplace in the United States, as machines perform tasks once done by humans, The Atlanta Journal-Constitution reported.

Now, automated sewing could breathe new life into the South's garment industry, which has been decimated in recent decades as jobs went to cheaper workers overseas.

But it will look a lot different than before. The idea behind one textile manufacturing plant of the future was dreamed up in a one-story industrial building on Atlanta's west side. Twenty-four "Sewbots" will soon be churning out a shirt about every 30 seconds in a new factory in Arkansas.

Suzhou Tian Yuan Garments Co, the Chinese owner of the new Arkansas plant, has cheap reliable power, proximity to cotton and well-off consumers. And it opens the way for American-made robots to compete with low-cost foreign labor, the Atlanta newspaper reported.

The Arkansas plant is expected to open later this year and employ 400 workers. Many of the positions are for technicians with coding and electro-mechanical knowledge.

"We want people who can work with robots," said Palaniswamy "Raj" Rajan, chief executive of Atlanta-based SoftWear Automation, which designed the Sewbots.

"That is where the new economy comes in," Rajan said. The idea behind the Sewbots sprung from federally funded research at the Georgia Institute of Technology. The government was interested because military equipment, including uniforms, must be U.S made, the newspaper reported.

In five years, Rajan hopes Sewbots make 25 percent of the four billion T-shirts sold yearly in the U.S. Only about 2 percent sold in the U.S. are made here today, according to one estimate.

But Rajan's plans don't stop at T-shirts. He believes SoftWear Automation in the next five years will master the 70 or more steps for machine-made jeans and dress shirts. All told, he thinks a robot-driven garment industry could add 50,000 to 100,000 U.S. jobs over the next decade.

University of Georgia textile professor and textile expert Greg Vessels calls Rajan's sales goals "quite optimistic."Even if those goals are met, the level of employment in the textile industry would still be far less than what it used to be, he added. But the trend toward automation will continue, experts say.

"Speed and automation is the key" to staying competitive, said Marty Moran, the CEO of Buhler Yarns and the chairman of the trade organization the National Council for Textile Organizations.