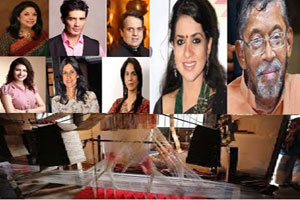 Varanasi, which is Prime Minister Narendra Modiâ€™s constituency, has plenty of weavers who are banking on government support to survive in the mass-production market economy. Their goods, which are individually designed, take time to be made, while cheaper textiles versions pose a threat to their livelihood.

Thus, the countryâ€™s leading fashion designers will set up units and tie up with Varanasi weavers to promote their products nationally and internationally.

The joint venture between the designers and government will focus on national-level promotion, top-quality media campaigns, exhibitions, and shows for the awareness and promotion of the contemporary hand-made goods.

The collaboration would fructify in creating a product line, which will finally be exhibited in all major museums of India to showcase talent and textile. The fashion line will also be promoted under the Make in India brand on the international forum.

These celebrity designers have been roped in by BJP member and party's spokesperson from Mumbai, Shaina NC, who is also a designer by profession, for the project which comes under Prime Minister Narendra Modi's celebrated Make in India banner and begins with the PM's constituency in Varanasi.

For the purpose, Shaina along with the designers met textile minister Santosh Gangwar here on Monday, to formalise the project and work out the details.

Shaina N C, who is piloting the project, said they have come together for â€˜Make in Indiaâ€™ and be a part of this campaign to design, manufacture and produce the best textiles in Banaras and thereby generate employment.

The traditional weaves and textiles are fast losing out as they have become less viable for the weavers, as they are very expensive and hence is not affordable by the masses and cheaper yarns like Chinese silk have come in as substitutes for mass scale production .

She added that the idea behind bringing together the designers was to help the weavers of Varanasi scale up their business.

The BJP leader, who is also a fashion designer, said after meeting Gangwar that as the design fraternity our endeavour is to get the artisans, who were deserting their craft due to low returns, into the mainstream and to produce it (their goods) thereby generating employment.

The handloom that the Indian design and craft community are largely concerned with, are those that offer a set of traditionally-specialized textile skills.

The product line that the new project will come with by collaborating with the designers, will finally be exhibited in all major museums of India to showcase talent and textile, and then be promoted under the 'Make in India' brand on the international forum.

In line with 'Make in India' to be a part of this campaign to design, manufacture and produce the best textiles in Benares and thereby generate employment.

After working on the Banarasi weavers, the project hopes to move on with handloom weavers in Odisha and the Paithani weavers of Maharashtra.