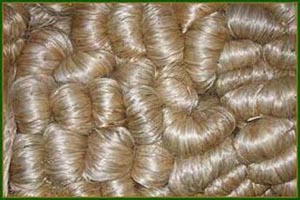 The state-owned jute mills in Khulna-Jessore industrial belt has registered a sharp fall in export of jute goods by 38.65 percent in the just concluded fiscal year compared to its preceding fiscal due to lack of demand in global market, over the political instability in major importing countries.

According to Bangladesh Jute Mills Corporation (BJMC), about 31,647-tonne jute goods was exported from nine state-run jute mills of the region till the first week of June in the fiscal 2013-14, against the export of 81,881-tonne in the fiscal 2012-13.

The nine jute mills are going through a serious financial crisis as about 43,174-tonne of their production remains unsold. This has created a huge uncertainty about the purchase of raw jute by the mills as well as payment of wages of their workers and employees.

The political instability in major jute importing countries, including Syria, Iraq, Sudan and Egypt, has led to the decline in jute-made items export from Bangladesh due to which jute goods worth Tk 400 billion remains stockpiled in the mills. On the other hand with the increasing use of synthetic sacks, sale of jute goods in the local market remains low.

To cope with the dwindling situation faced by the jute industry, they are trying to explore new markets for jute and jute goods in different countries.