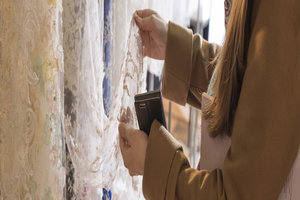 Paul Bernstock, co-owner of milliner Bernstock Speirs, said that, â€œWe were very happy with the show this season. Weâ€™ve been going for years and you see a lot of the same exhibitors who are there each season, but we actually found some new things this time around.â€

Julie Greenough, marketing manager for the Yorkshire-based woollen mill AW Hainsworth, said, â€œBusiness is definitely a little bit slower because thereâ€™s a big question around Brexit. People are taking longer to make decisions. The good thing is that a lot of buyers want to work with British companies, buy British fabrics and be British made.â€

Most attendees at the two-day event on 10-11 October at Londonâ€™s One Marylebone came from the UK, although there were some international visitors in attendance from the US, Scandinavia and Africa.

The mood among both exhibitors and buyers was described as optimistic by Laurent Garigue, owner of the eponymous fabric manufacturer. He said that, â€œWe are a resilient bunch, the textile community, forever forward thinking,â€ Also, â€œIt was surprisingly upbeat at the show. People were eager and professional, and we took orders.â€

Buyers were similarly hopeful about the show.

Nailya Belkacemi, managing director at high-end garment manufacturer Plus Samples, said a change in clientele at the show this season benefited them, â€œIn the past it used to be mostly bridal boutiques and luxury eveningwear buyers visiting the show, but there were a lot of new designers attending who want ethical manufacturing with a low carbon footprint and recycled materials. Itâ€™s great to see people taking a more resourceful approach to fashion.â€

Bridal designer Nicola Harvey-Rowley, who has been attending since the show started in 2002, expressed that, â€œI bought quite a lot this season. Weâ€™re always looking for something new. This season we found some beautiful fabrics from JosÃ© MarÃ­a Ruiz, a Spanish company. Michaelâ€™s Bridal Fabrics, Carrington and Litmans also had great stock. Obviously, the conversation is all about Brexit at the moment. I think we all just want it to be sorted so we can move on with our lives and businesses.â€