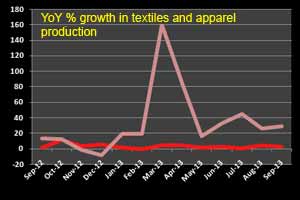 The estimates of Index of Industrial Production for the month of September 2013, released by the Central Statistics Office, indicate a disappointing performance of the manufacturing sector during the month. While the general Index was up 2%, manufacturing growth was just 0.6% against the backdrop of the decline of 1.6% recorded in September 2012. Mining output was up 3.3%, higher than 2.2% of last year power generation increased substantially by 12.9% in September 2013 compared to 3.9% of September 2012. This implies that power generation is not an impediment for industrial growth, as it has been depicted until now. Cumulative growth in the industrial production during April-September 2013-14 was more disappointing. It was just 0.4% during the period but a shade higher than last year.

The textile industry has fared better than the other industrial groups. Dissecting the growth across 22 industry groups, â€˜Wearing apparel; dressing and dyeing of furâ€™ is found to have clocked the highest growth of 29.2% during September. This growth corroborates with the significant increase in exports of apparel and garment exports in recent months. Production of wearing apparel, dressing and dyeing of fur has been posting double and even three digit year on year growth since the past nine months. In March 2013, production grew by almost 160% while the second quarter recorded an average growth of 33%.

However, textiles production â€“ the raw material for clothing and apparel has been slow and does not match with growth of the latter. Yarn production has been growing at an average rate of 10% since the beginning of the 2013-14 financial year upto August while clothing apparel output have grown at an average rate of 40% during the same period. This anomaly is inexplicable, since textile production is measured on volume basis.