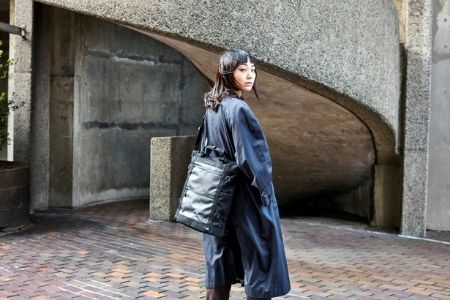 Groundtruth, a British start-up has utilized 120 plastic bottles to create its RIKR backpack that won the public vote in the wearable design category of this year’s Dezeen Award. The lightweight durable bags are made from a fabric called GT-RK-001. The fabric was developed by Groundtruth from recycled-plastic that ensured waterproof properties.

Groundtruth developed the textile over the course of eighteen months. The main aim that resulted in the discovery of GT-RK-001 textile was that the company was trying to replicate properties of VX21, a three-layered fabric that has high tensile strength and abrasion resistance irrespective of its incredibly thin structure. It was mostly used for making sails for racing boats.

The newly launched bags are completely black and are capable of holding up to 24 liters. The bag is made with a Tripstop weave, which is Groundtruth's triangular reinterpretation of a ripstop weave. This type of weave is generally related to a chequered pattern of reinforcement yarns integrated into a fabric to ensure it doesn’t tear or rip.

The company stated that they had forgone many samples to arrive at the end product. In order to achieve strength, they used a combination of a ballistic weave, a method that requires twisting of the yarn as it is woven and a ripstop structure.

Every element of the bag is mostly made from recycled polyethylene terephthalate (rPET) which includes the padding, air mesh of the shoulder straps and the fleece lining for the laptop compartment. Even the zippers have been exclusively made from recycled polyethylene. Despite their approach, currently, the bag is still coated with virgin thermoplastic polyurethane (TPU) to guarantee a waterproof finish.

Georgina Scott stated that they were working with a bio-coatings company for their next range of bags that they plan to launch in 2021. He added that it was vital that the bio-coatings were made durable enough to give the waterproofing functionality.

Their products received recognition in the market when it was tested against cars' environmental conditions by Robert Swan, during his expeditions to both the North and South Pole.

The company stated that its products had spent over two weeks in Antarctica sailing around the coastline with daily expeditions to the mainland. This put their prototypes to their maximum tests. The company claimed that their backpacks zodiac excursions [on inflatable rafts], saltwater, freezing blizzards and penguin poo. Through these tests, the company enhanced its functionality, redefined the design and advanced its ongoing textile development.