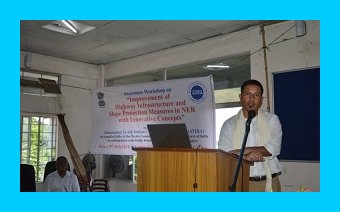 Speaking on the occasion as chief guest, West Garo Hills Deputy Commissioner, Ram Singh said that considering the topography of the region, the Central Government has launched the scheme in the year 2015 mainly for the North Eastern Region which aims to control soil erosion, protection of hill slope and reservoir lining for water retention during road construction. He therefore, urged the concerned officials to utilise these scheme properly and wherever necessary with the help of technical expert adding that the scheme should not go to waste like few other projects implemented in the state.

A one-day awareness workshop on â€œImprovement of Highway Infrastructure and Slope Protection Measures in North Eastern Region with Innovative Conceptsâ€ was held at SMELC Conference Hall on Monday which was organised by Ahmedabad Textile Industryâ€™s Research Association (ATIRA) on behalf of Office of the Textile Commissioner, Ministry of Textiles in collaboration with Public Works Department (PWD).

The workshop was organised for civil engineers of Garo Hills District, Soil and Water Conservation and other related departments.

Barbora stated that the scheme which has been formulated by the Ministry of Textiles for promoting usage of Geotechnical Textile in the North East Region for five years from 2014-15 to 2018-19 with a financial outlay of 427 Crore has two components of which Component â€“I (Hard Intervention) with total outlay of Rs. 374 Crore and Component â€“II (Soft Interventions) with total outlay of Rs. 43 Crores. He also informed that the ultimate objective of the scheme is to promote and encourage adoption of modern, cost effective technology in North East and other regions of the country and improve the durability, function and life of infrastructure leading to savings in cost and time maintenance.A technical session also followed where different officials spoke on different topics.

While delivering on the â€œScheme for Promoting Usage of Geotechnical Textile in North Eastern Regionâ€ P S Barbora, In-charge NERC, ATIRA presented an overview of the scheme, its functions, objectives and the benefits of using Geotechnical Textile in civil engineering projects like road construction, slope protection and water reservoirs in the region.

He educated that Geotechnical Textiles are technical textile products manufactured from natural and man-made fibres using woven, knitting and non-woven methods which are being used globally to address dangers to infrastructure caused by degradation and natural disasters.