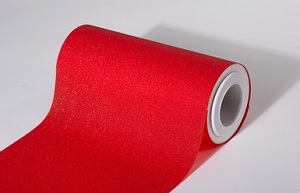 Frosted and textile finishes by KDX

KDX has unveiled added two new variants to its its thermal laminating film range with, frosted and textile finishes, following the prior launch of a metallic version.

The textile film is available in red, yellow or blue, while the frosted film is sold in clear, red or black. KDX said the products benefit from not having a shim line, which usually recur at intervals on these sorts of materials, to allow for unrestricted product sizes and smoother production.

UK sales manager Jonathan Collett said, â€œWhile I would certainly describe prices as competitive, I cannot really say what they are competing against as the films offer something completely different and I see no opposition in the market.

He added that, â€œOur aim is at the luxury gift market; for example, gift boxes, wine or whiskey bottles, and that type of thing. A lot of people concentrate on gloss and matt films, but I think they will find this range a very interesting variation. â€œInterest is already high for 2019 and we at KDX will continue to create and innovate consistently.â€

According to Collett, the films are compatible with offset UV press over printing and spot-UV and foiling finishing.

The new films, available from last month, come in 200m long sample roll widths of 440mm or 630mm for shorter runs, one-off orders and product testing in order to offset the â€œprohibitiveâ€ cost of larger rolls.

The textile thermal film is designed for a fabric-like finish with â€œluxurious feelingâ€ that can be adopted for books, brochures and packaging. The frosted film is designed for a matt sand-like texture and uniformity of colour to imbue a â€œtactile, elegant effectâ€ while preserving the image colour beneath.