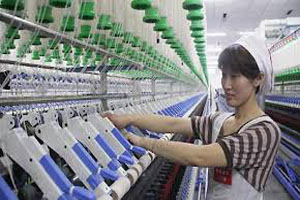 Referring to the currency supply problem, Eftekhari said that now, for one month, no currency has been given to anybody in the clothing industry. "Before that, we were importing major raw materials from China through the Kunlun bank of China, but with the imposition of sanctions, China was the first country which announced that they will not provide us with textile raw materials anymore."

The official import of clothes into Iran last year amounted to $59 million, which is a small part of foreign clothes in the local market, member of the board of directors of Iran Textile Exports and Manufacturers Association Majid Nami quoted in Tehran.

He said currently there are some 300,000 people working in Iran's clothing industry, and the figure has the potential to increase to 1 million. Also, he added that, "But now our concern is the loss of 200,000 jobs.â€

"Another problem is the flow of liquidity and circulating capital. Nothing can be done overnight by a producer, due to the rise in the price of currency and the fall in the value of the national currency," he added.