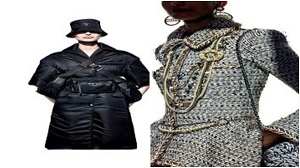 Last seasonâ€™s Versace collection, for which Donatella Versace revived the bold, brash prints made famous by her late brother, Gianni, in the 1990s, was an instant success, striking a chord with young customers who hadnâ€™t experienced them the first time around. Versace continued to allude to the houseâ€™s playful heritage for fall, this time with a new batch of strikingly vibrant patterns. Tartans mixed with florals mixed with Medusa heads covered the models from head scarf to toe. Indeed, at times, the styling was uncharacteristically modestâ€”a clever foil for the eye-catching prints.

Coco Chanelâ€™s affair in the 1920s with the second Duke of Westminster, Englandâ€™s richest man at the time, resulted in more than just wagging tongues. It was after Chanel borrowed his fishing and hunting attire, made from Scottish carded wool, that her signature tweed fabric and, subsequently, the loosely structured Chanel jacketâ€”was born. During his multidecade tenure at Chanel, Karl Lagerfeld has reimagined the tweed jacket every which way, but for fall he returned to its intrinsically haute-bourgeois roots, sending out refined suits with matching bags and strings of pearlsâ€”a look thatâ€™s iconically Coco.

Last season, Miuccia Prada brought back the durable, water-resistant Pocono nylon that has been a staple of the brand since it was introduced it in 1984. (In fact, almost every look in Pradaâ€™s Spring 2018 show included a variation of the brandâ€™s iconic nylon bagâ€”whether a backpack, bum bag, or shoulder bag.) And Prada isn't the only brand looking back.

At Versace, Donatella Versace resuscitated the bold, brash prints made famous by her late brother, Gianni, in the 1990s. Meanwhile, Dior reissued the iconic Saddle bag, which was introduced in Diorâ€™s spring 2000 collection, in an array of materials, ranging from beaded and patchwork variations to the classic Dior-logo canvas for fall.