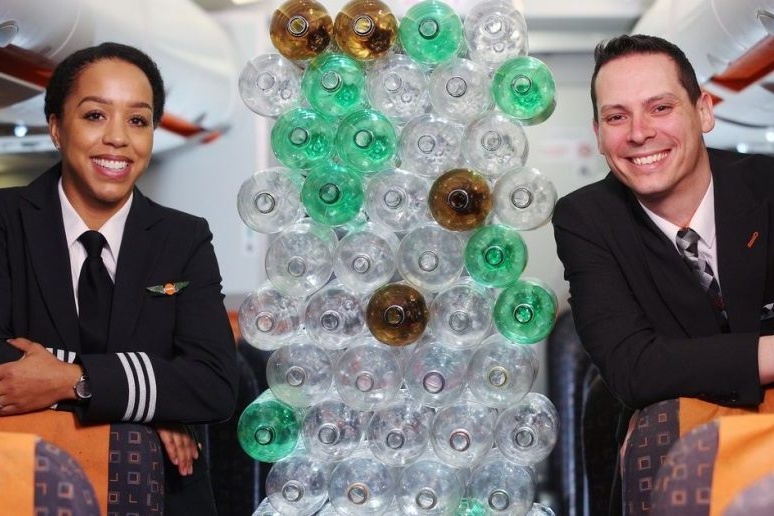 According to the airline, this partnership would avoid almost half a million plastic bottles from ending up in landfills or seas each year, totaling 2.7 million bottles over the duration of the five-year contract.

The new uniforms, which will be distributed to cabin crew members later this month, are produced from around 45 bottles and have a carbon impact that is 75% lower than traditional polyester.

The cloth had been tailored to the airline's current style and had been tested in cabin and flight deck environments last year.

It was found to be "more abrasion-resistant" than the non-recycled alternative and provides even more elasticity, a four-way stretch, improving fit and flexibility of movement for increased comfort and durability, according to the airline. In addition, all plastic clothing-related packaging, such as collar stays, shirt clips, and shirt cuffs, has been replaced with recyclable and biodegradable materials.

Easyjet said the measure complements previous initiatives to decrease plastic aboard, such as a 50-pence rebate on hot beverages for customers who bring a reusable cup.

The airline announced intentions to offset carbon emissions from all of its domestic and international flights in 2019.

Bernard Birt, managing director of Tailored Image, said that their role as a bespoke uniform and corporate wear provider is to offer creative solutions for their clients, based around comfort and practicality for their wearers. With the Easyjet project, there was also the added task of meeting their very high criteria for reducing environmental impact.

Birt added that they established a collaborative approach with a mill that is leading the way in the creation of sustainable textiles by combining the knowledge of their design and garment technology teams. They were thrilled to be a part of this project from the start, and they are delighted that the success of the new Easyjet wardrobe underlines the value of their award-winning customer-focused approach and their ability to satisfy even the most stringent briefs.