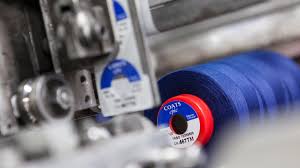 The opening of the new building comes soon after the recent announcement of Coats being named one of the best companies to work for in Vietnam by HR Asia, the leading regional HR publication. Coats first opened a site in Hanoi in 1992 and relocated to the current Hung Yen location in 2006. It also has a manufacturing facility in Ho Chi Minh City.

The geographic location of Vietnam is an essential part of the global footprint of Coats and it is a major hub in South East Asia for worldwide apparel sourcing. As Asia moves from being principally a manufacturing base to also being one of the worldâ€™s largest consumer markets, including an increasing demand for high-end garments, the manufacturing output from its factories is increasing.

Digital is a crucial support of the Coats strategy and Vietnam was an early adopter of Coats eComm, a customer tool to make thread ordering simple and quick. It manufactures many of Coatsâ€™ newest and most innovative products including EcoVerde, the range of premium threads made from 100% recycled post-consumer recycled core spun thread. It also produces flagship thread ranges, such as Epic, as well as Performance Materials yarns.

The additional capacity makes the Hung Yen site one of Coatsâ€™ largest manufacturing units. It will allow dyeing and finishing operations to be increased by over 40% and also provide additional warehouse space. The manufacturer says that the site, which is already a leader in many of the internal manufacturing performance metrics of Coats, demonstrates the companyâ€™s recognition of the growing customer base in the north of Vietnam.

Coats, a leading industrial thread manufacturer, has revealed the latest enlargement to itâ€™s global operations with the opening of a new development in Vietnam. The extension to its site in Hung Yen, near Hanoi, was formally opened by Rajiv Sharma, Group Chief Executive, at a ceremony on 21 September. The event was attended by representatives from the long-standing joint venture in Vietnam with Phong Phu Corporation, with local government officials, customers, suppliers and members of the Coats Group Executive Team. The extension was formally opened by Rajiv Sharma at a ceremony on 21 September. Â© Coats

Rajiv Sharma, Group Chief Executive, Coats expressed that, â€œThis is an impressive development which will benefit all our key stakeholders. Expanding our operations positions us even more strongly to meet the future needs of our customers in Vietnam, and beyond, as we work together to adapt and change in response to rapidly changing market demands.â€