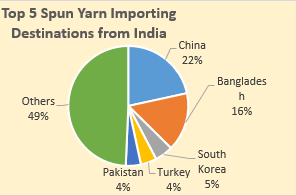 Indiaâ€™s spun yarn exports in September 2016 declined 30.2 per cent in volume terms while it was down 24.3 per cent in value terms. The average per unit realisation was down US cents 3 a kg from previous month and up US cents 24 a kg as compared to September 2015.

Chinaâ€™s yarn imports from Vietnam surged 34% in September from a year earlier whereas Indian shipments to China were down 56%, and imports from Pakistan have lost 30%.

South Korea was the third largest importer of spun yarns, which saw volume surging 43.4 per cent while rose 45 per cent in value. These three top importers together accounted for around 42.3 per cent of all spun yarns exported from India in September.

Cotton yarn was exported to 73 countries during the month and the average unit price realization was down US cents 5 a kg from previous month and up US cents 31 a kg from the same month a year ago.

China was the largest importer of cotton yarn from India in September, followed by Bangladesh and South Korea. The top three together accounted for more than 50 per cent of cotton yarn exported from India.

Nine countries did not import any cotton yarn from India, including Honduras, El Salvador and Saudi Arabia. In September 2016, significant deceleration was seen in export to Argentina, United Arab Emirates, Norway, Lebanon and Kenya.