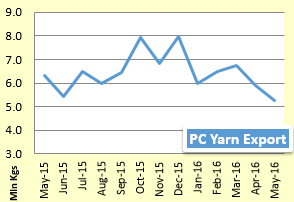 5.3 million kg of PC yarns was exported from India during May. Polyester cottons yarns were exported to 47 countries in May 2016, of which, Bangladesh and Honduras were the largest importers of PC yarn from India in May followed by Colombia.

Philippines, Australia, Russia, Venezuela and Guatemala were the fastest growing markets for PC yarns while Dominican Republic significantly reduced its import of PC yarns from India.

Algeria and Indonesia were among the 11 countries that did not import any PC yarns from India during May. Belgium was the major destination among the 7 new markets found in May.

Russia and Yemen were the new major markets for PV yarn while 6 countries did not import any PV yarn during the month, including the major ones like Peru, Israel and Czech Republic.

Also, acrylic/cotton yarn prices were down 16 per cent YoY in May.