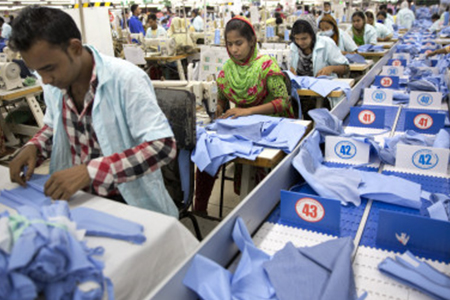 Bangladesh has been named among the worst countries on the planet for workers' rights with people from the garment industry among the worst affected, according to a new poll.

"Employees in Bangladesh were exposed to mass dismissals, in the garment industry, strikes were often met with intense brutality by police forces," the report states.

It also said employees in Bangladesh couldn't exercise their fundamental rights on the job without fear of retaliation and confronted three big issues: violence, mass dismissals and regressive laws.

January 2019, in protest over wages, at least 750 were in the immediate aftermath, while over 50 were injured as a consequence of heavy-handed police intervention," the report continued.

Others on the list of ten worst states for workers in 2020 include Brazil, Colombia, Egypt, Honduras, India, Kazakhstan, the Philippines, Turkey and Zimbabwe.

The report stated that in Bangladesh's garment sector, which represents more than 80 percent of the country's export economy, over 500,000 employees employed in export processing zones (EPZs) were not permitted to form or join unions.

The seventh version of the ITUC Global Rights Index ranked 144 countries on the degree of respect for employees' rights,'' and discovered that 85 percent violated employees' right to call a strike.

Workers were subjected to violence in 51 countries, while the number of Countries that refused or constrained freedom of speech had risen from 54 from 2019 to 56 in 2020.

Planet for working individuals, for seven years, running, on account of the ongoing With being the most regressive area for employees' representation and Marriage rights, '' the report said.