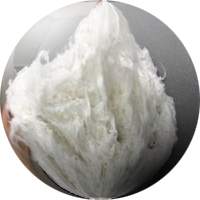 To produce rayon the old fashioned way it needs chemically intense processing of wood pulp or plant fibers. The cellulose thatâ€™s extracted is treated with caustic soda, carbon disulfide, and sulfuric acid. Youâ€™re no doubt familiar with how nasty sulfuric acid can be, but carbon disulfide is usually dangerous stuff, too and itâ€™s exposure can lead to cramps, muscle weakness, and a loss of feeling in the extremities.

The process employed by Nanollose is a severe contrast. Instead of cutting down trees or harvesting plants and dousing it with harsh chemicals they just let microbes chow down on biomass that would have otherwise been wasted. It takes just a few weeks for the microbes to turn biomass into usable cellulose.

For starters, Nanollose fed coconut leftovers shipped in from Indonesia to its hungry microbes. While that worked nicely for trial-sized production, ramping up to an industrial scale will require more plentiful sources of biomass.

Companies have been manufacturing rayon since the early 20th century. Itâ€™s relatively low- cost to produce and doesnâ€™t require as much human labor as cotton or wool.

The company says itâ€™s looking at options as it prepares to enhance the production and seize a piece of the multi-billion dollar rayon production pie.

Another advantage of Nanolloseâ€™s is that it can be processed by existing industrial equipment. Manufacturers who want to switch from wood- or plant-derived cellulose to the microbe-produced alternative wonâ€™t have to do any re-tooling at their mills.

Producing fibers like cotton and wool for clothing can require a lot of land and water. Luckily, there are scientists working to create more modern, eco-friendly sources. By and large, thereâ€™s an Australian company that has come up with an extensive new way to produce rayon fibers. Nanollose is doing it in a much more eco-friendly way with the help of microscopic organisms.