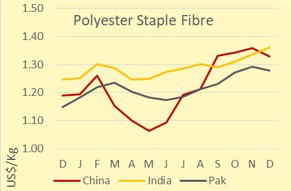 Polyester staple fibre prices in December 2017 slipped in China amid cautious buying sentiment during the month. PSF manufacturers also reduced the operating rate due to insipid trading sentiment. In Pakistan, PSF prices inched up this month as demand was strong in polyester market. In India, PSF offers were steady during the month. In China, 1.4D PSF was down US cents 3 a kg as compared to November. In India, 1.2D PSF prices were up US cents 2 a kg from last month.

Polyester filament yarn prices in December edged down in China amid poor demand and insipid transactions. Shenghong was planning to carry out maintenance on three PFY lines with 750,000 tons per year total capacity, with two planned in January and the rest in March. In India, PFY prices were firm during the month. In Pakistan, PFY offers were flat on the month. In China, POY 75/72 prices were down US cents 5 a kg in Shengze while Indian POY 130/34 prices were up US cent 1 a kg.

Nylon filament yarn prices in China were down on the month as there was limited support from the raw material market. Market was flat on the back of dull chip market and lackluster demand as inventory was increasing slightly. Operating rates in textile sector were not high amid low season, and as a result, demand for FDY, DTY and POY was still on a need-to basis. In China, semi-dull FDY70D/24F was down US cents 13 a kg from last month while FDY40D fell US cents 13 a kg.

Acrylic staple fibre prices in December slipped in China while they were stable in India and Pakistan during the month. In China, ASF offers fell significantly amid softening feedstock ACN market, giving a push to downstream procurement. Prices in India and Pakistan were steady during the month. In China, offers for cotton-type staple were down US cents 16 a kg and medium-length staple fell US cents 17 a kg.

Viscose staple fibre prices in December fell in China on modest buying sentiment of market participants as downstream mills still showed low interest with sidelined stance. In China, offers for VSF declined US cents 8 a kg on the month.

Viscose filament yarn prices in Asian markets rolled over during the month. In China, viscose filament yarn offers were firm and market sentiment was quiet while inventory was sufficient during the month. Downstream buyers generally purchased as and when needed, and as a result demand was moderate. However, poor performance in the terminal section lead to slight changes in the buying interest. In India, viscose filament yarn prices were firm amid decent demand. In China, 120D dull VFY offers were up US cents 2 a kg while bright also up US cents 2 a kg. In India, 120D bright VFY rose US cents 5 from previous month.

US cotton futures closed the last day of the year with a rise on higher demand from yarn producers during the month. An estimate by the International Cotton Advisory Committee (ICAC) projected 2017-18 global cotton production at 25.57 million tons against 23.05 million tons estimated for 2016-17. The March contract on ICE Futures US rose 8.8% on the month. The Cotlook A index inched up 7.4% in December. The China Cotton slipped 1.1% on the month. In Pakistan, cotton prices surged amid hectic buying by spinners. The official spot rate rose 6.5% on the month. In India, cotton prices surged due to concerns over fall in production due to the damage caused by the pink bollworm infestation on cotton crop in Maharashtra, Madhya Pradesh and Telangana, among other producing states. Most varieties saw prices surge 4.2-9.0% in December.