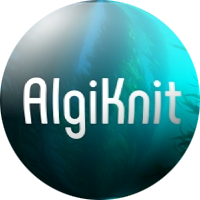 The American start-up AlgiKnit makes fibers from kelp that can be spun into yarn. AlgiKnit offers a solution that could transform the highly polluting textile industry into a circular economy by using biomaterials. After having been used, this seaweed textile can serve as compost or animal feed. It also reduces the carbon footprint of the clothing industry, because no harmful fiber particles are lost during washing, such as is the case with polyester. The company is working on a prototype of a T-shirt and sneakers will be next.

The New York-based start-up AlgiKnit won 100,000 euros in the Postcode Lottery Green Challenge 2018. During the final, 26-year-old Tessa Callaghan impressed the international jury with her environmentally-friendly seaweed textile, a kelp that is spun into yarn. In addition to AlgiKnit, LettUs Grow from the UK and AquaBattery from The Netherlands will take the same amount home.

The first prize of 500,000 euros goes to the air bubble curtain developed by The Great Bubble Barrier from The Netherlands. The runner-up prize of 200,000 euros is for the textile recycle marketplace founded by Estonian start-up Reverse Resources. This brings the total prize pool of one of the biggest sustainability competitions in the world to 1 million euros. In addition to the prize money, all five finalists will receive six months of expert coaching to improve the likelihood of their businesses succeeding.