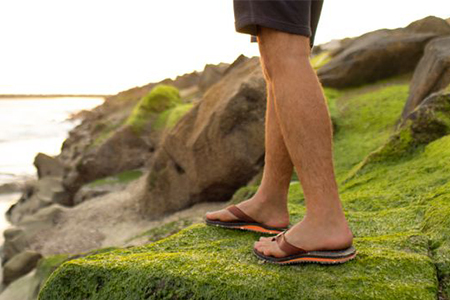 Algae flip flops could save the oceans

The professor of chemistry and biochemistry, Mike Burkart announced the development of a polymer from algae which has the ability to decompose naturally, at the public research university in San Diego.

They began growing algae in raceway ponds where they could grow them at very high densities. Burkart during a tour of the lab for Reuters, stated once the algae were fully grown, they remove the water and make the algae into a very viscous paste. He further added that they extract all the lipids out of the algae and utilize it to make the materials.

Initially, the laboratory-made gasoline from algae before turning its focus to surfboards and now the flip-flops. Burkart said that all the major shoe manufacturers have come and enquired about the possibility of using this new innovation in their products. The simple footwear is affordable and popular around the world and therefore covers a significant part of discarded plastics that are polluting oceans and seas. Burkart is hopeful to change this through his algae-based shoe wear.

In 2017, the university uploaded a video and Stephen Mayfield, a professor of Biology and Director at UC San Diego, explained how over three billion flip-flops are made every year and it is known to be the no.1 footwear in India, China and Africa. He further states that a lot of the pollution that comes into the oceans is discards that flow down from rivers into the ocean.

He further stated that if they were able to make the flip-flops sustainable and biodegradable, they have the opportunity to not only impact San Diego but every beach community on the planet. The main focus is to ensure that the thrown away components will be eaten by organisms.

They are also taking to various companies associated with packaging and other types of materials that they believe will live forever in the environment.