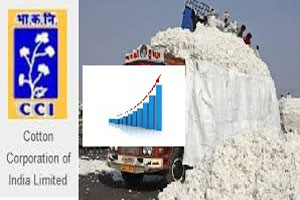 Cotton crop failure in Pakistan has led to coercion for the nation to raise its imports following the hike in local prices. This has profited the worldâ€™s largest producer of the cotton fibre. The Indian Governmentâ€™s cotton purchases are to plummet to 89% due to the increased exports in the 2015-16 marketing year.

B.K. Mishra, chairman and managing director of the state-run Cotton Corporation of India (CCI) said that prices have been moved above the MSP (minimum support price) level in most states and farmers are selling to private players.

The increase in shipments to Pakistan, Bangladesh, and Vietnam will help India trim spending on cotton purchases by nearly Rs. 140 billion ($2 billion) in the year that started on Oct. 1, although the rise in volumes on the international market will cap recent gains in global prices.

In the current marketing year, the government purchases were again expected to rise to last year's level due to poor demand from China. But a sudden increase in demand from Pakistan and a decision by India's top producing state Gujarat to buy from farmers at levels higher than the MSP boosted prices and reduced the need for state support.

The government will likely spend just Rs. 20 billion for procurement of 1 million bales this year, Mr. Mishra said that they have bought 700,000 bales so far, but henceforth they are expecting a slowdown in purchases due to rising prices.

Dhiren Sheth, president of the Cotton Association of India added that demand is healthy for Indian cotton from Pakistan and other Asian countries and prices could stabilize around the current level. India has so far contracted 3.6 million bales for exports, including nearly 2 million bales to Pakistan.